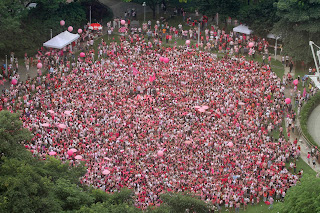 Singapore, June 18, 2011 – Over 10,000 pink-attired Singaporeans turned Hong Lim Park into a sea of pink, where they gathered – for the third year running – to form a giant pink dot in a show of support for inclusiveness, diversity and the freedom to love. This breaks Pink Dot 2010’s previous record for the largest public gathering ever seen at the Speakers’ Corner since its opening in 2000, and is more than twice the number of people who turned up last year.This milestone event is organised by a group of local volunteers and aims to raise awareness and foster deeper understanding of the basic human need to love and be loved, regardless of one’s sexual orientation. Pink Dot 2011 aims to re-affirm the movement’s credo, Supporting the Freedom to Love, by encouraging Singaporeans to speak up for their LGBT friends and relatives. This peaceful event was attended by both straight and gay Singaporeans and permanent residents, many who came with their family members.Pink Dot co-spokesperson Paerin Choa said: “There are few words that can fully describe what we are feeling right now. To have this many people celebrating this event with us is a truly humbling experience, and we are greatly touched by this show of solidarity and support from Singaporeans.

“One of Pink Dot’s primary aims is to engender an appreciation of Singapore’s diversity – regardless of race, language, religion, and sexual orientation, we are all Singaporeans. We have come some ways in encouraging inclusivity and acceptance of all segments of society, and we hope that more continue to join us in helping to fulfil this aim.”

This event was the culmination of an intensive month-long outreach – a key highlight of which was Pink Dot’s official Campaign Video, directed by acclaimed local director Boo Junfeng. Tugging the heartstrings of viewers, it generated an astounding 200,000 hits in the four short weeks since it was first uploaded to YouTube.

Pink Dot Sg has also motivated similar movements overseas, with cities such as New York, London, Montreal, even as far away as Anchorage, Alaska, organising their own local editions of Pink Dot.

And finally, international giant Google Singapore has also thrown its considerable weight behind the Freedom to Love as a supporter, reflecting its own policies of equality and inclusivity.

Pink Dot co-spokesperson, Rebecca Ling, said: “We are greatly heartened by this year’s turn-out, and it reaffirms our belief that we can make Singapore into a more loving home for all of us. Such immense support from over 10,000 people today is a clear and strong testament to the growing acceptance and awareness among Singaporeans of the LGBT community. Pink Dot 2011 was a milestone in many ways, and we look forward to setting even more milestones in years to come.” 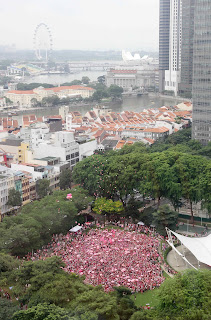