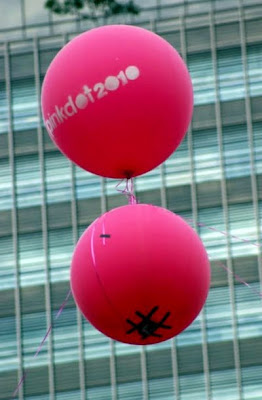 We had our cameras (with super duper lenses) all set at the vantage point for the aerial photo of Pink Dot 2010. But then a day before the event, we wondered what sorts of images we could capture if we simply attached a camera to one of our mega (36-inch) balloons?

It was no easy feat. The engineer among our midst did some calculations – it would take 3-4 big balloons to lift that 200g Canon compact camera high enough to capture Pink Dot in its entirety (around 20-storeys high). 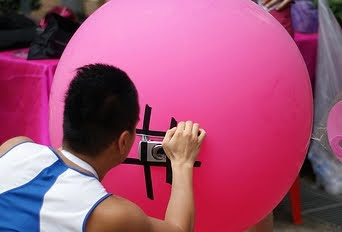 We weren’t ready to go all the way with this experiment (should our army black tape fail us, the camera will seriously injure someone; not to mention, we’d be out of a perfectly good camera) and so, we went with just two balloons – enough to lift BalloonCamTM to a 5-storey height. 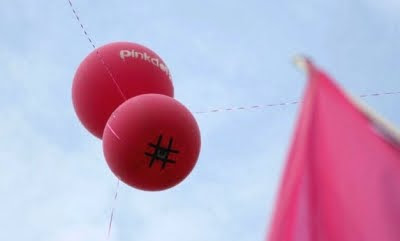 The camera was attached to one balloon with merely four pieces of tape (Our faith in the black tape has been renewed!); that balloon was attached to another mega-balloon; and both balloons were held in place by three long (pink) ribbons.

We did a test run at 4pm, before the start of the event. Preliminary footages looked promising. However, because the camera was attached to a lightweight balloon at the end of the day, we could only capture whatever the winds allowed us… 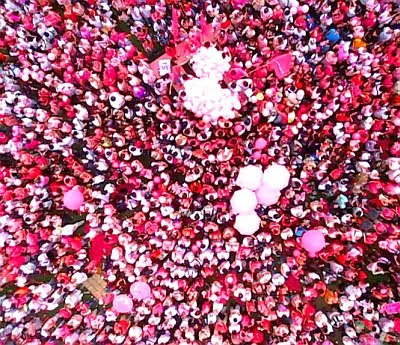 The camera was set to video mode. We recorded 2GB of data, and the image that you see above is a still from the video (at 640×480) – right before the event’s grand finale.

We’re quite happy with the result. The images aren’t as sharp as the ones captured by our professional photogs, but we think it provides an interesting (low-flying) bird’s eye view that complements the eagle view of our cameras way up there (on the 23rd floor). 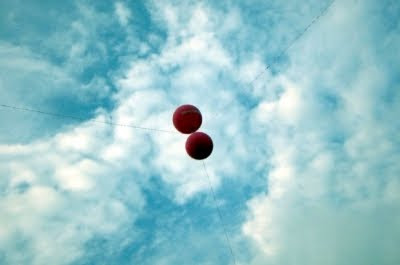 Let’s see if we can refine our methods and improve on BalloonCamTM next year! Meanwhile, anyone with (constructive) suggestions… drop us an email or fill in the comments section below 🙂

(The Pink Dot peeps would like to compliment Suiling Ng, Mohd Hisham & Adrian Ch for their wonderful pictures)
Tags: 2010, 2010-photos

Pink Dot on The Straits Times!