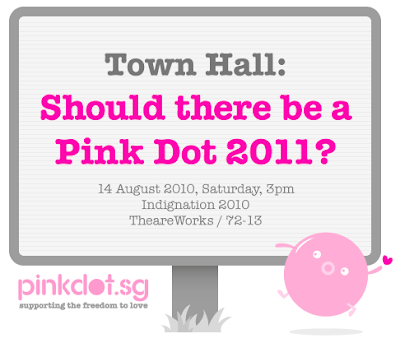 Pink Dot started out as a grassroots initiative at a town hall meeting. In November 2008, some 20 people responded to an open call for ideas. Over drinks at a bar, they shared their ideas and views on putting together a Speakers Corner event in support of LGBT Singaporeans.

What transpired were two consecutive years of social campaigns that have reached thousands of Singaporeans, straight and gay.

In 2009, the inaugural Pink Dot event drew a 2,500-strong crowd to Speakers Corner. It was, then, the largest public gathering ever recorded at the park, and the first to champion LGBT interests. Online, the ‘Freedom to Love’ message reached tens of thousands on Blogger, YouTube and Facebook.

2010’s ‘Focusing on our Families’ theme drew thousands of people to read and watch (and cry over too, we’ve been told) the campaign’s real-life stories. On 15 May 2010, more than 4,000 people showed up at the Speakers Corner in a massive show of support for LGBT Singaporeans and their families.

What effect has Pink Dot had on the larger Singapore society?

How has it affected relationships within families, with friends, at school and at the workplace?

How could Pink Dot better its support of the local LGBT community?

We invite you to put on your pink-tintedglasses for an afternoon of crystal ball gazing and to share your views.

Pink Dot is proud to be a part of IndigNation 2010.

Make Your Own Pink Dot